and the winner is...

Today was the day. The day we were presenting our hospital as voted - best designed of 2013. It had a feeling like you were at the Juno's or something. We have some video for you, although we must

warn you, the quality is not very good. Dr. Ross Clarke, a member of the Vet Economics advisory board led the introductions, the award was presented to us, then it was off to the races.

Dr. Lechten rocked the show (not literally) but well spoken to a room packed of people. There
were laughs and chuckles as Dr. Lechten added in some humor about the pitfalls of building a new hospital, but never the less, a very well informed presentation. There were very few questions to answer at the end of the show, as Dr. Lechten was so thorough, she covered pretty much everything you needed to know. Many people came up to us afterwards to congratulate us on the win. It truly was a proud day. Afterwards the Veterinary Economics magazine had a brief interview with us about how the team was so involved with the building of the new facility.

Posted by Allandale Veterinary Hospital at 8:06 PM No comments:

all in a days work 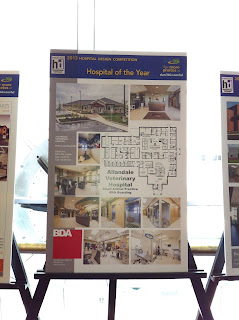 and for all you people out there that are like me and need assistance with their vision, I took a close up as well..... 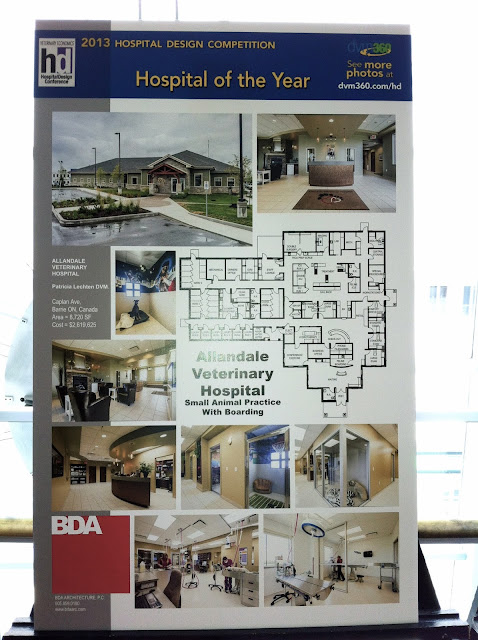 there is was beautifully displayed on an easel in the center. What a proud moment. We then carried on with the registration process, finding out where we will be presenting tomorrow, and ran into  Wayne Usiak the architect from Albuquerque who created AVH. From there it was back to the hotel where we both did quite a bit of paperwork/computer work - the work you can't get done while at the hospital. It turned out to be a productive day. Dr. Lechten then slipped out and she was involved with a group discussion about owners who are interested in building their own hospitals. Once back we decided to go down to the very well known "Fiorella's Jack Stack Barbecue". Which we both had a very well known dish to kansas city - burnt ends. Let me Wikipedia that for you:


Burnt ends are flavorful pieces of meat cut from the point half of a smoked brisket. A traditional part of Kansas City barbecue, burnt ends are considered a delicacy in barbecue cooking. Either the entire brisket is cooked whole, then the point end removed and cooked further, or the point and flat are separated prior to cooking. Due to the higher fat content of the brisket point, it takes longer to fully cook to tender and render out fat and collagen. This longer cooking gave rise to the name "burnt ends". Sometimes when the flat is done, the point is returned to the smoker for further cooking. Some cooks re-season the point at this time.Kansas City style burnt ends are usually served cubed with sauce either on top or on the side. A "proper" burnt end should display a modest amount of "bark" or char on at least one side. Burnt ends can be served alone (sometimes smothered in barbecue sauce) or in sandwiches, as well as in a variety of other dishes, including baked beans[1] and gumbo.

Following the fab meal, we obviously had to walk it off home and enjoyed the sights of the downtown city area at night. Despite the very loud "screaming coming form the trees" I asked Dr. Lechten (a native to Missouri) what the heck is that it sounds like a bird stuck somewhere- she laughed and said oh those are "cicada's". They are an insect that makes that noise at night. What an awful screeching sound, and let me tell you if I could have voice recorded it for you I would have!


Posted by Allandale Veterinary Hospital at 10:38 PM No comments:

hello from the warm south....

Well not too far south, Dr. Lechten and Lisa have traveled today to Kansas City, MO. Over the next few days they will be presenting and speaking to others that are interested in building the "dream come true" hospital. They have prepared an hour presentation about their experiences of the "new" Allandale Veterinary Hospital. They will teach their peers and first time builders about possible obstacles and challenges of building a new hospital. They are very excited to speak at the CVC Hospital Design Conference, as attendees will be from all over the North America. They will be sure to post photos daily of their travels and experiences while out of the country. Here are a few from today.... 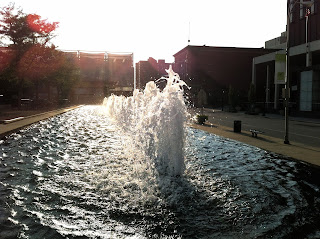 Posted by Allandale Veterinary Hospital at 8:55 PM No comments:

Dr. Lechten has been nominated for Best Vet in Barrie! We are proud and honored for this nomination. Please been sure to vote! Only 1 vote per IP address is allowed. Happy voting!!